PMIC specializes in both in-plane and through-thickness thermal conductivity evaluation of materials, including laminates, carbon fibers, ceramics, composites, and alloys.  Complex structures, such as bonded and fastened joints, including IC chips bonded to heat sink material, can be measured, as well as the thermal resistance of interfaces, multi-layer materials, and thin-film materials.  See the bottom of this page for a partial list of materials PMIC has tested.  Testing can be performed in air, partial atmosphere, vacuum, or inert gas.

WHICH STANDARD IS BEST?  Some industries require specific standards be used to confirm product properties.  For new application materials not ready for certification, product development, and general characterization, PMIC can recommend the best test method based on multiple criteria.

Full descriptions of testing capabilities and test methods are available below per system type.

This describes the capabilities and limitations of PMIC's test systems which are used to perform testing per ASTM C177  and ASTM C1044.

The Guarded-Hot-Plate Apparatus allows for direct measurement of heat flux through materials.  Specimens are placed in the space between the heater plate and cooling plates (Figures 1 and 2).  Thermal properties are calculated from measurements of the metering area, energy input, temperatures, and thickness of the specimen.  ASTM C177 uses two identical specimens, but a single-sided mode of measurement is available for the same system using Practice C1044.

ASTM C518 measurements rely on the calibration of the heat flow meter apparatus and the quality of the heat flux transducers used, but the procedure itself is deceptively simple: a specimen is placed between two heat flux transducers with uniform thermal contact between a hot plate and a cold plate, as shown in Figure 3.  A steady-state heat flux is established through the test specimen.  The plate temperatures and plate separation are measured.

This describes the capabilities and limitations of PMIC's test systems which are used to perform testing per ASTM E1225 and D5470 testing.

The testing stack is made by inserting the specimen between two reference materials (meter bars) with a uniform compressive load.  A temperature gradient is formed by maintaining a temperature difference between two actively heated and cooled plates, as shown in Figures 4 and 5.  A minimum of two temperature sensors are placed in each stack element in order to determine the steady state temperature gradient.  Apparent heat flow is calculated per unit area in the meter bars.  Specimen thermal conductivity at temperature is then calculated. 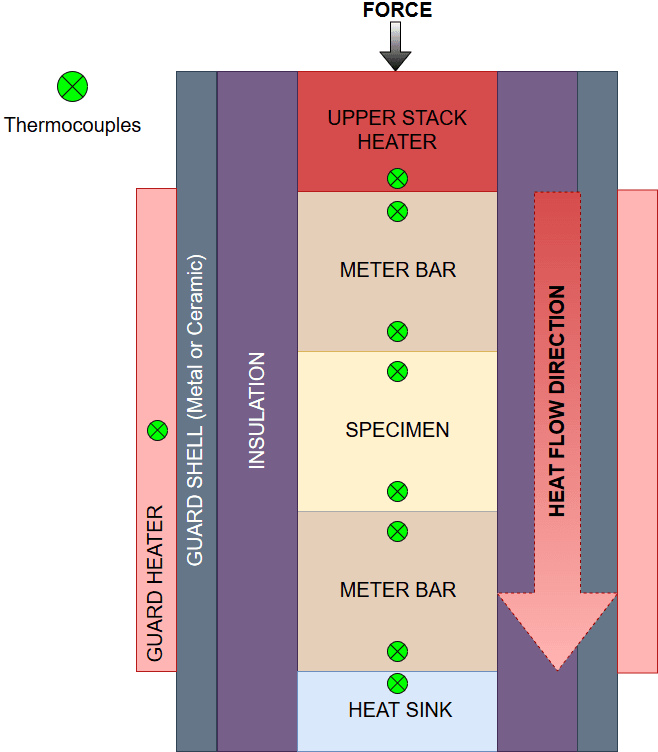 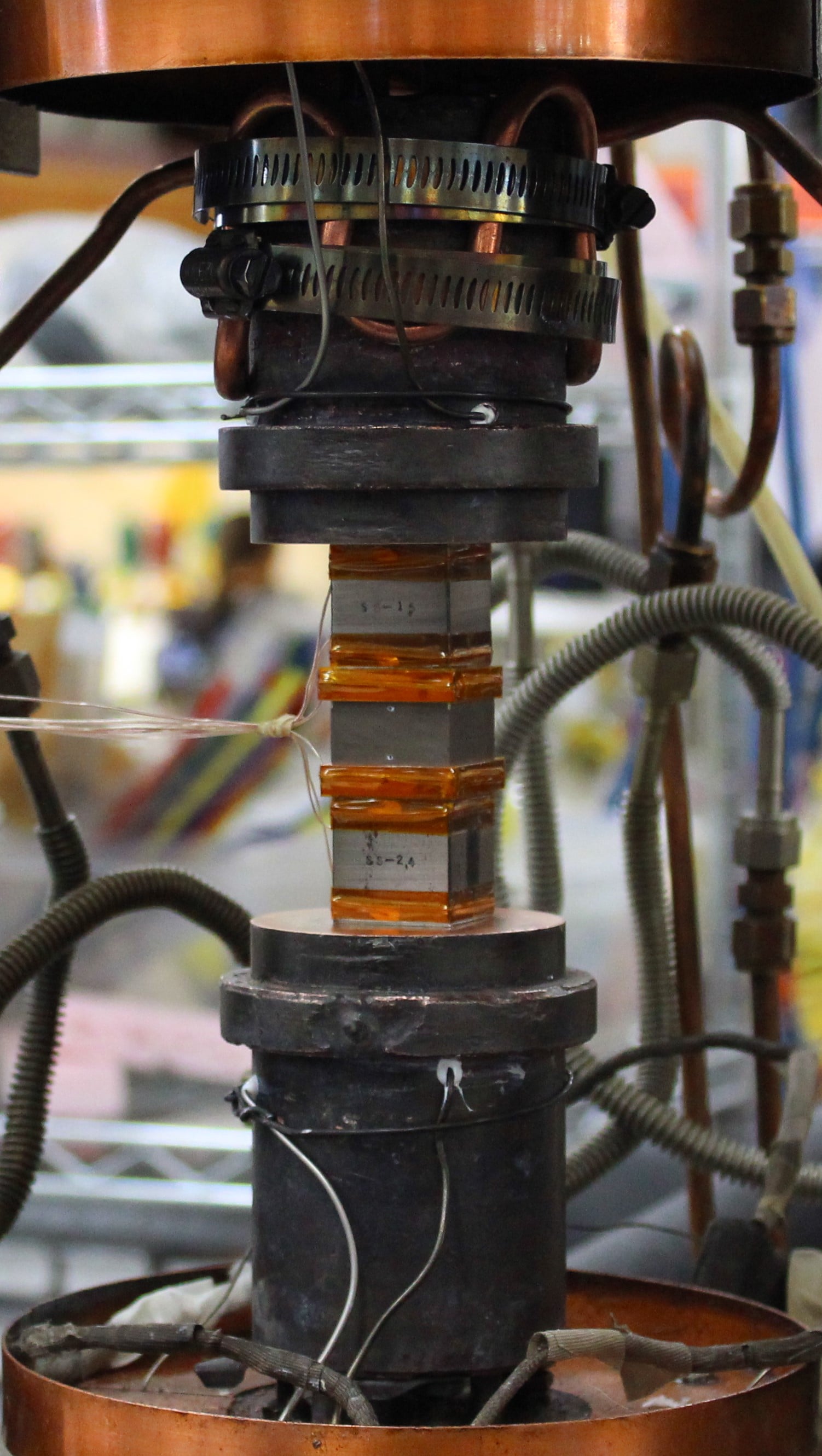 This stacking method can also be used to calculate the thermal conductivity of coatings.  Alloy substrates are coated with the customers’ material and tested.  The results are then calculated against bare alloy blocks and bare alloy stacks as shown below in Figure 7.

Small, thin specimens are subjected to a high-intensity energy pulse.  The top of the specimen absorbs the energy of the pulse and the instrument records the temperature of the specimen’s bottom.  Thermal diffusivity is calculated from specimen thickness and the time required for the bottom of the specimen to reach a relative increase in temperature.

PMIC uses the MATHIS TCi by C-Therm (link to brochure) to perform thermal conductivity measurements by the modified transient plane source and transient line source techniques.  This instrument can be used to test solids, liquids, powders, and pastes in various environmental enclosures when material or sample geometries restrict the use of PMIC’s preferred precision test methods and as the above ASTM standards recommend.

TDTR testing is a non-contact, laser-based technique that measures the thermal conductivity of materials (particularly thin films). This method can be applied to materials with smooth surfaces and thin films with a thickness range from nanometers to microns.

The idea behind this technique is that a pump laser pulse heats the surface of a material and a subsequent probe laser pulse measures a change in optical reflectivity that is created by the temperature excursion generated by the pump laser pulse. The reflectivity signal is measured as a function of time and the data are analyzed using a heat diffusion model to extract the thermal conductivity [1].

The requirements for this test are as follows:

Dr. Cahill has partnered with PMIC to offer this testing to customers and performs testing as a subcontractor. David Cahill [at the University of Illinois at Urbana-Champaign] is the Willett Professor of Engineering and Professor of Materials Science and Engineering (MatSE) [2]. He received his Ph.D. in condensed matter physics from Cornell University, and worked as a postdoctoral research associate at the IBM Watson Research Center” [3]. 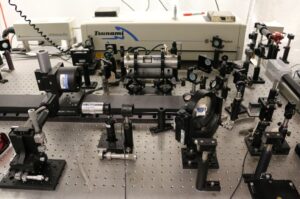 A searchable list of the ASTM standards by which PMIC performs thermal conductivity, thermal diffusivity, and thermal resistance testing.

A partial list of materials for which PMIC has characterized the thermal conductivity, using various measurement techniques.